No-Hitters, Sleepless Nights and the Importance of Hope

Every time I sit down to watch a baseball game, there's a small part of me that hopes I'll be lucky enough to watch a no-hitter or perfect game. Although it's only happened once (I randomly stumbled upon Randy Johnson's perfect game a few years back, see video below):


I find myself thoroughly disappointed when a batter reaches first base and breaks up the no-no.  I have a similar thought every time we put Lukas (my eight-month old son) down in his crib for the night. Although he's only slept through the night once, I have great hope that that he will sleep eight straight hours. Even though I have very little evidence that would suggest Lukas can make it an entire night without waking up, or that a pitcher will throw a no-hitter, for some reason my hope remains.

Hope is a funny thing. And hope is an important thing. It's funny because in many ways, it flies in the face of logic. The things we hope for are often a stretch, if not completely unrealistic. It's important because hope is perhaps the single greatest thing that enables people to endure.

In the case of Cubs fans (like myself), it's also the things that keeps us saying, "there's always next year." 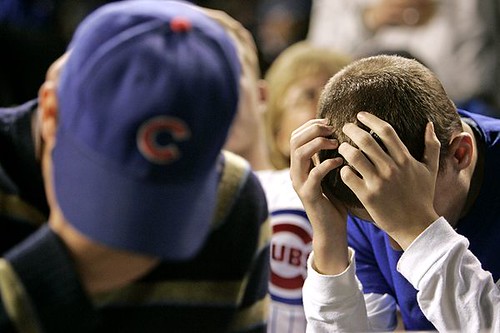 I've been thinking a lot about hope in relation to Lukas. Specifically with the person he will become. I've never been a parent before, and I have no evidence that would suggest I have any clue what I'm doing. Mostly, I just hope I don't screw him up too bad. I also hope that he'll grow to be 6'5", have an incredible slider and lead the Cubs to win the World Series (kidding...sort of...).

I also realize that we can do everything "right" as parents, and Lukas can turn out like this kid:

I'm not suggesting parents have no influence over their children. I'm saying that I acknowledge that really good parents can have really difficult children. I suppose my greatest hope is not that Lukas is or does something. My simple hope is that Lukas always knows his parents love him--even when we punish him and especially when we screw up, which we inevitably will do.

And I think that's what makes hope, hope. It probably won't always seem like we love him; but I hope he never doubts that's it's true.

I also hope he hope he maintains his sense of humor: