Why I'm a World-Class Hyprocrite

I was a complete jackass.

Sure, the circumstances warranted it, but I was an insolent clown. As previously mentioned in this blog, Sarah and I spent about a day and a half at Boston Children's last week after our three-week old son had a somewhat serious health scare. Ultimately it turned out to be not as bad as the doctors had feared, but it was the scariest 24 hours of my life (2nd would be being stung by a poisonous scorpion in Guatemala, 3rd would be seeing this guy quarterback the Bears--see below). 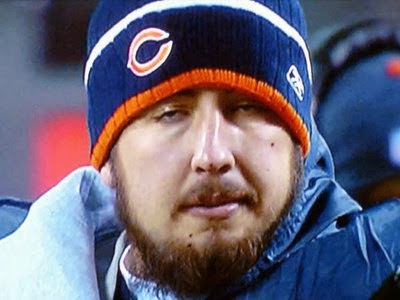 Although the hospital staff obviously wanted the very best for Lukas, I treated them with complete ungraciousness. I was impatient with nurses, hinted at the ineptitude of the doctors...directly to the doctors...ironic considering this, and actually audible scoffed at the security card at the welcome desk (How dare you ask me why we are here! What a ridiculous question!). My lowest moment came when a young man, probably completing his undergraduate degree in nursing came into our room to ask if he could take Lukas' blood pressure. As he left to grab a machine from another room, I mumbled not-too-under my breath, "Sure you can check his blood pressure, but could I see your driver's license first." He definitely heard me.

The thing is, these nurses were so good to us. Not only did they meet emotional needs (e.g., transforming an operating room into a "guest room" for us since all the singles were occupied and we were in no condition to share a room with someone) but, way more importantly, they correctly (we think) diagnosed Lukas' physical ailment.

And throughout our time there, I was an absolute pill.

At this point you're probably thinking one of two things. Either, "I would have acted the same way", or "It's completely understandable for a scared dad to act that way." The first might be true, but I have to disagree with the second. What motivates me to write this blog, in fact what is behind its name (1,000 good mornings), is that every day truly is a gift. In fact, I believe one's ability to find beauty and truth in the midst of situations just like these can provide the greatest source of hope for people.

I feared the worst for my son, but what if I was incredible husband to Sarah and was kind and compassionate to the entire medical staff, despite how terrible this situation was? I imagine that would have been a great witness to them.

A few hours before we left the hospital we heard a man going from room to room singing these wonderfully funny songs. We could not see him, but I imagine he was dressed like a clown and probably had acted a lot like this guy.


This man made me equal parts wonderfully happy and devastatingly sad. I smiled because somehow he was able to make terribly sick children smile and laugh. I cried because I realized that some of them were likely terminally ill. I'm embarrassed and disgusted with myself, but I actually remember thinking, "What's the point? This is just a temporary relief for these kids."

Almost immediately after that thought, the pieces slid into place and I realized just how profoundly I had missed a valuable lesson. People need hope. Conveniently, there is a special kind of hope that endures beyond this life. I have no idea if the clown was agnostic, gnostic, atheistic, Mormon, Muslim or "other" but I'm quite convinced he understand hope much better than I did during my entire time at the hospital.

It probably wouldn't have been appropriate for me to tie a bike horn to my jacket and stick rubber chickens in the nurses scrubs, but I could have been kind to them, and I could have treated them with love and respect. But I didn't. I missed an opportunity, and for that I am a hypocrite. I attempt to write a blog that encourages people and maybe even causes them to laugh once or twice; I claim that following Jesus and living by his "Kingdom principles" are most important to me, but I can't help but feel in this instance I missed wide right. Kind of like this guy.