Why I Am a Fan of Michigan Football (Again) 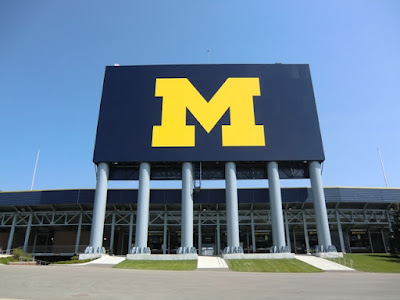 I used to love watching University of Michigan football games. I loved the "Big House." I loved the winged helmets. I loved the maize and blue. I remember watching the A-Train, the "#1 receivers" (if you don't understand this reference, follow the link and scroll down) 6'5" unauthentic quarterbacks and "three yards and a cloud of dust."

Growing up I would watch every game in either my Jarrett Irons or Drew Henson jersey and would stand throughout the entire game receiving snaps from an imaginary center, taking a five step drop, and firing strikes into our basement couch.

I still have a VHS recording of the Michigan vs. Penn State game on November 8, 1997. Diehard Michigan fans will remember that game for Charles Woodson doing this:


From a very early age my dad engrained in me several steadfast guidelines to live by:

1. Do everything without grumbling or complaining (Philippians 2:14)
2. Always say "pardon?" not "what?" if you didn't hear someone
3. Always cheer for Michigan
4. Never cheer for Ohio State

I was pretty young when this happened so I don't remember the details well, but apparently for Christmas one year one of brothers gave my dad a Ohio State hip pack. As the story goes, my dad opened the gift, saw what it was, and without uttering a word marched over to the garbage can and threw it away. I'm pretty sure my brother was about 10 at the time. True story.

My grandfather and dad were the biggest Michigan fans I knew. In 1997 (the year they won the national championship) I was fortunate enough to go to the big house with my dad and grandpa. It was awesome. They played Baylor, way before the days of RGIII. Michigan won 38-3.

But (as I've mentioned 200 times in this blog) my dad passed away and then a number of years later, so did my grandpa. After they died, not only did I not feel a "pull" to cheer for the team I found it incredibly difficult to do so. Literally every game brought back painful memories. So I "divorced" the team. When people asked why I stopped rooting for the Wolverines, I made up some story about how long-time coach, Lloyd Carr couldn't win the "big game" but the real reason was because the games brought up memories I didn't want to deal with.

A few weeks ago Sarah and I visited Ann Arbor while spending some time with my grandparents. We walked around the city (very cool, by the way) then headed over to the stadium. We weren't able to get inside the gates (of course) so we walked around the perimeter. In a word, it is spectacular. 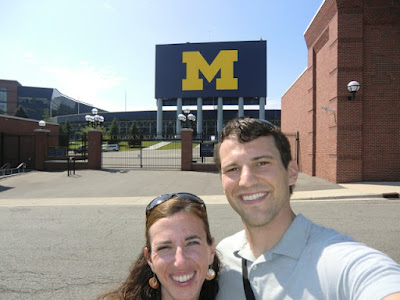 While we were walking, a funny thing started to happen. I found myself recollecting fond memories of Michigan football. I remembered Bob Griese, college football analyst and former NFL great, fighting back tears as he attempted to comment on the 1998 Rose Bowl game without any bias. A difficult task as he watched his son Brian, quarterback Michigan to a victory. I remembered David Terrell, Braylon Edwards and Desmond Howard. I remember the 1997 championship and the Baylor game. And you know what? All the memories were good. Every single one of them. Then it occurred to me, by refusing to think about or support Michigan I was not only depriving myself of fantastic memories I was also was preventing a very natural healing process to occur in response to my dad and grandfather's death.


I suppose I've always known this but it wasn't until I visited Michigan Stadium that it actually was affirmed to me as true. It is never good to avoid and ignore places of hurt and wounding. Avoiding hurt certainly feels appropriate (and it is at times it is) but it wasn't until I walked around the stadium did I realize that in a some small way I had avoided living life fully. I tried to protect myself, but really was only successful in removing something that was special to my family because I didn't know how to deal with it.

So, I'm officially back in board. I'm a Michigan fan again. I gotta tell you, it's been a very cathartic process. If you are still dealing with loss, I encourage you to mourn appropriately, but at some point you got to jump back on the bandwagon. I'm glad I did.