The Dark Knight Rises: A Review 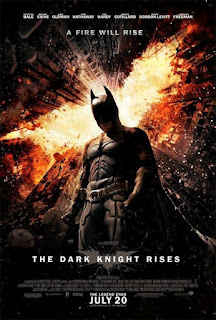 For those of you that haven't seen The Dark Knight Rises,
I will do my best to avoid spoiling any of the film.


By my estimation, 1992 was the best Christmas ever. For reasons I can't quite recall, I was incredibly excited to receive a plastic blue and red table and chair set. I have no idea why it was awesome, but it was awesome to the tune of my favorite Christmas present ever (my over-usage of the term "awesome" is treading dangerously close to W's). Last Friday night I went to see The Dark Knight Rises expecting a blue and red table and chair set. I assumed (maybe unfairly) that Christopher Nolan would continue the upward trajectory that he started with Batman Begins, and continued with The Dark Knight. I expected TDKR to be the crescendo of the trilogy.


[On an aside, I will not mention the shooting in Colorado in this post. I have no desire to contribute to the shooter's infamy]

Instead, Rises felt an awful lot like Christmas 1994 for my oldest brother Alan. Alan turned 16 in 1994. My all-to-practical dad decided that he should give his son the most important thing a father could give to a 16 year-old newly licensed male: a case of motor oil. Alan was...how do you put this...well...disappointed. It's not as though he didn't need motor oil for his car, and it wasn't as though he hated the gift, he was just expecting more.

I left the theater Friday night similarly wanting more. But I strongly adhere to three steadfast rules in life:
For those of you not fortunate enough to have met my brother, I attached a photo of him below (I'm only kidding Alan...).


My brother is a savant when it comes to the "historicity" of comic book movies and quite often serves as my phone-a-friend during heated comic book debates (In case you are wondering, yes you can kill Wolverine. You must either drown him or cut off his head). Usually the conversation begins like this:

"Alan, did this really happen?"
"Well, how much time do you have?"
"Why?"
"I can give you the long answer or the Cliff Notes version."

In the event that you ask Alan a comic book related question, always ask for the long version. It's worth your time.

We both have been waiting four years for this movie to come out, so we were pretty excited to not only see the movie but discuss it afterwards.

After we covered the accuracy of the movie (Again, I will avoid spoiling the film, just know that Nolan threw a bone or two to comic book "literalists"), we ventured into the more overarching, "did you like the movie." Alan didn't exactly say it was like receiving a case of oil for his 16th birthday, but that is sort of how he felt. He was expecting a plastic table and chair set. Yesterday I went on Rotten Tomatoes to read a few reviews on the film. It didn't take long to see that the critics were blasting this film. They claimed that Christopher Nolan essentially abandoned the creativity and willingness to "push the envelope" that made the first two films of the trilogy so good. Alan agreed and added that they made the last film over-ambitiously "grand" by introducing too many new characters. The general consensus was that the director/producer/writer spent 2.5 hours building this enormous plot line, then 15 minutes resolving it.

Interestingly though, the critic's Tomatometer on Rotten Tomatoes is at 87%.

This is like a professor reading a student's paper, listing 75 things wrong with it, claiming it's a failure, advising the student to drop out of school, then giving that student a B/B+ on the paper. I think this all goes back to the case of oil vs. the plastic table. I think we were all expecting the film to not only be the greatest movie ever made, but also cure cancer, force Cher into retirement and single-handedly enable the Cubs to win the world series.

You want to hear my assessment of the movie? It's really good and you should definitely go see it. Is it better than The Dark Knight? No, probably not. Does it belong in the trilogy? Absolutely. The problem was our expectations were WAY too high. The reality is these movies took on a life of their own, particularly with all the devastating events surrounding them (Heath Ledger/Aurora). They became bigger than movies and at the end of the day the fact that Rises was "just a movie" disappointed us.