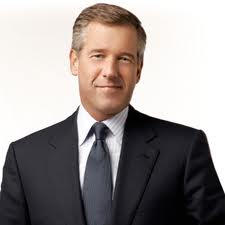 Every weekday, at 6:30PM I hit the "pause" button on my life. I will literally makes plans with friends that surround but never interfere with 6:30 - 7PM.

Why, you may ask?

You may know him as the news anchor for NBC's Nightly News. I know him as so much more. Basically, he is the perfect news anchor. He has personality, but is not too flashy. He's funny but not "hahahaha." He's more "hah, that's pretty good."

Last night I was watching B-Dubs and I had this thought. I'm pretty sure I would enjoy getting an eye exam if Brian was administering it. Then it clicked. I'm pretty sure that Brian Williams would make every aspect of everyone's life better.

Imagine getting pulled over for speeding and it's BW giving you a ticket. You would be angry, but be honest, you would probably find him fair, gracious and rather pleasant.

Imagine calling the cable company. Even if they told you your bill was $75 higher than it's supposed to be, wouldn't you be more eager to be put on hold for 20 minutes knowing Brian was the light at the end of the tunnel?

In a few years Jerry Logan and I are going to get colonoscopies together. We both have family members that have been diagnosed with colon cancer. Now I'm terrified to get this done, but if Brian was performing the procedure...

This in a nutshell, is the "Panbrian Replaceable Theory." Insert Mr. Williams into any situation and that situation instantaneously improves.

Something to think about...