I've been thinking about how I would summarize the Gordon men's basketball trip for about a day and a half. I've thought about the highs and lows, the best memories and the hardest moments. Despite my best efforts, I couldn't help but to compare this trip with the two previous trips I made with the Gordon basketball team and Sports Ambassadors. After my freshman year the team traveled to Taiwan, and after my first year of coaching we went to Argentina.

I asked Jordan Kelly during the trip how he felt the trip compared to our time in Argentina. Jordan, in all his wisdom, said to me "I'm actually trying not to compare the trips. The trips are both just very unique and different."

The more I thought about that, the more I realized just how true this is. Each trips has been incredibly distinctive.

Taiwan's culture was so unique to all of the guys on the team. We couldn't read any signs, couldn't speak the language and we weren't exactly comfortable eating fish eyes (I'm not kidding - they are a delicacy in Taiwan).

Although Argentina also was very unique culturally, the biggest distinctive was the fact that Coach Murphy's predecessor took a job a few weeks before the team was to depart for the trip. As a result, the twenty-two year old assistant coach was asked to lead the trip. Yes, I was that assistant.  Think about that for a second. As Park (I think it was) pointed out to me on this trip, that is someone Stephen Herod's age leading a trip. God bless the parents of that team for being patient and gracious with me.

Against this backdrop, I spent most of the day today thinking about what made our trip to Guatemala and El Salvador distinctive.

Then it occurred to me.

This trip was made unique by the team's attitude and effort. Not to say that the previous teams did not work hard and didn't have positives attitudes, but this team was special. Shaun Roach did foot fire for about 4.5 hours straight at one of the clinics but never complained. Garrett Harden barked orders in Spanglish and Hans Miersma choked down pupusa after pupusa but never complained. Dave Dempsey and Jordan Kelly performed the "tuku, tuku, taka, taka" dance about twelve times and every time had a huge smile on their faces. I'll omit the names, but several guys were very...ill...on the trip but would literally sprint to and from the bathrooms so as not to miss too much of the clinics or games. 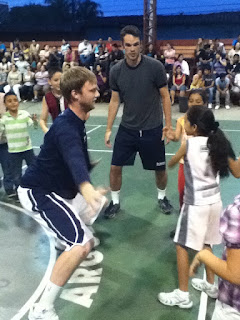 Park...well...Park basically just enjoyed being the center of attention of every female in Central American. The trip wasn't difficult for Park at all (just kidding Parque). 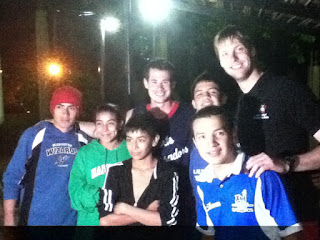 As I reflected further, I have to admit...I...got...a...little...emotional. A few months ago I decided that for various reason I could not continue coaching at Gordon. This trip was my last official direct involvement with the men's basketball team. After four years as a player and four years as a coach, it was time for me to move on. These trips have a way of building momentum from one year to another. In many ways I will mourn not being a part of the team next year and in the years to come after a trip like this. These guys have shared experiences that simply would not have been available in the States. Although I will miss the games, practices, competition - what I will miss the most has nothing to do with basketball. I am going to miss Adam Herod's "jokes" (if you were on the trip you know why there had to be quotations around the word 'jokes'), I'm going to miss making fun of Luke somehow incorporating a southern twang into the phrase, "Me llamo Luke. Soy de North Carolina." I'm going to miss Jordan Kelly's sarcasm, Bill Walton impersonations, and James Ek's heated arguments about Rajon Rondo and Paul Pierce. 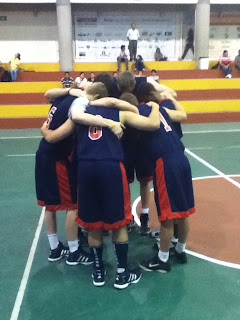 But even more, I will miss watching these young men mature into men of God. I believe these trips play a significant part in that process. I will miss them, but I honestly cannot think of a better way for me to end my time with the basketball team.

At church this morning I was asked by several people how the trip went. How do you summarize all the inside jokes, all the late nights and early mornings, all the special conversations, all of Park's girlfriends, and the ungodly smell that emanates from seventeen, 18-22 year-olds who brought enough clean clothes for a week (the trip was twelve days). 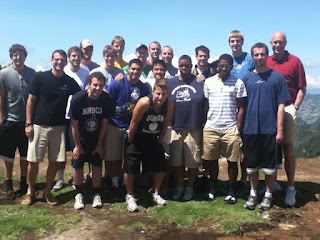 So when people asked me how the trip went, my response was pretty short and sweet. I said the trip was special.

This is a unique group of young men - a distinctive group of men - a special group of men, and I feel blessed to simply have been a part of it.

I asked my wife how she thought I should end this blog post. She suggested I end with a charge. So here it is...

Remember this trip. Remember the memories you shared. In four months when you start practice, remember getting up at 6:30AM to eat breakfast and get ready for a 9AM game. You've endured worse. In six months when you're playing Curry, or Endicott or Wentworth, remember we can come back from an 8-point deficit with two minutes to play. We've done it before. In one, two or three years when you graduate from Gordon and enter the work force, remember that you are blessed and that there are those without the basic life necessities throughout the world. In ten years when you are visiting Park in Guatemala (after he wins the presidential election) remember that he once introduced himself at one of the clinics as "My hungry Park."

But most importantly, remember the reason we went to Guatemala in the first place.

P.S. And when life is hard, call Adam. He's probably got a joke or two for you.

P.P.S. Don't think I wont still yell at you from the stands if you aren't getting back on defense.

Keith (you can call me "Keith" now. Even you Luke)