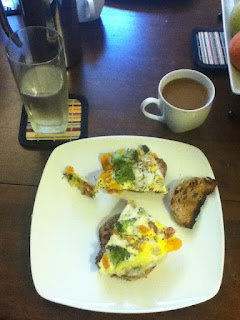 I couldn't wait for a nice breakfast with Sarah this morning. Last night I returned from a trip from Guatemala and El Salvador with the Gordon College men's basketball team (see previous postings to read about the trip). I had been gone for about 12 days and although I really enjoyed the refried beans and fried plantains for breakfast, I was excited about our usual breakfast routine. We had finished making a frittata and pouring our Guatemala coffee when we were joined by an unexpected guest.

I had no idea what it was at first. It was flying so I figured a cute little baby bird had somehow gotten stuck in our apartment. Sarah knew what it was immediately. 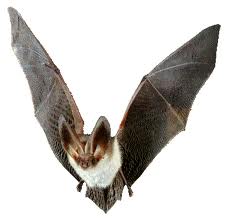 At this point you would think the macho "protector" male in me would take over. You would think. My first thought, "What the heck am I supposed to do about this bat?!?! I have no idea how to get ride of a bat! I don't want to touch it!" I didn't want to risk divorce so as it flew out of the kitchen I "chased" after it, the whole time thinking, "how do you catch a 10-inch flying rodent?"

On a side note, upon closer examination, the body of the bat was about .5 inches. I swear to you it was the size of a bald eagle when it was in our kitchen.

I walked towards the front door thinking the bat was in the guest bedroom. It wasn't. I opened the front door and sure enough the bat had slid underneath the front door (which maybe explains how he got in). Problem: we are on the third floor of an apartment building. How in the world do I get rid of this bat? So I grabbed the best weapon our apartment could produce (see below), went outside the back door and circled around to the front of the house. 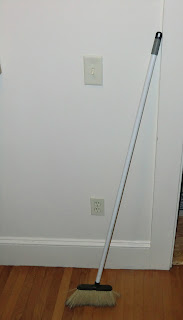 I climbed the stairs very slowly, not quite sure knowing where bats like to hide. I got to the third floor, looked around and eventually found the bat on a shelf just outside our door. Right. I tried "gesturing" with the broom that it would be in his best interest to fly down the stairs and through the front door which we had propped open. He didn't seem interested. Instead, he flew towards me.

I'm not proud of what I did next.

I swung my weapon at the flying rodent in an attempt to scare him into flying down the stairs. The broom connected with the bat and he free fell down the flights of stairs and landed on the ground floor. I quickly descended the stairs and found the bat hiding again underneath the front door. At this time Sarah was waiting outside the door with her jacket pulled over her head (she heard bats can get stuck in woman's hair. One should never read about bats on Google).

I opened the door and the bat scurried out from underneath.

I'm REALLY not proud of what happened next.

Not sure what to do I...well...hit the bat again and again with the broom.

Now you have to understand, my wife was/is incredibly scared of these things (She had a bat in this same apartment a few years ago). I felt like it was my duty as her husband to dispose of the creature. After I made sure it was dead, I brushed the thing outside the door and under a bush.

I felt and continue to feel terrible. I realize this isn't very "manly" of me, but i feel like I committed murder. But after I hit it once, I felt even worse knowing that I caused it so much pain. I felt like I had to put it out of its misery. I told this to Sarah. Her response: "Um, yeah, you probably shouldn't. He deserved it for coming into our apartment."

So there you have it. My wife is tougher than me and I'm a complete pansy. I wouldn't have lasted 3 hours on the Oregon Trail. 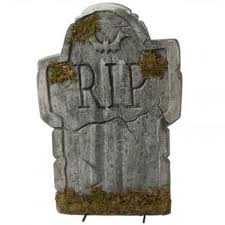 Tomorrow I will post my summary of the trip to Guatemala and El Salvador.
Email Post
Labels: Bald Eagles Bats Breakfast Brooms Rodents