We were warned twenty-seven times--literally by everyone. Apparently it is an irrefutable, undeniable and a historical proven fact that two-person kayaks leads to, at best, violent domestic disputes, and at worst, divorce. Logically, Sarah and I couldn't wait to give it a go. But I'm getting ahead of myself. Allow me to set the seen. 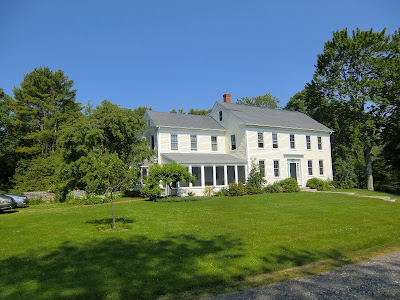 Sarah and I spent last weekend with her family in Brunswick, Maine. The place was beautiful. The house sat on 130 acres of land and came fully equipped with bikes, kayaks, snow shoes, beach gear, canoes, fishing polls, etc. Basically the garage looked like a mini version of L.L. Bean.


It was one of, if not the, most relaxing place I have every been to in my life. 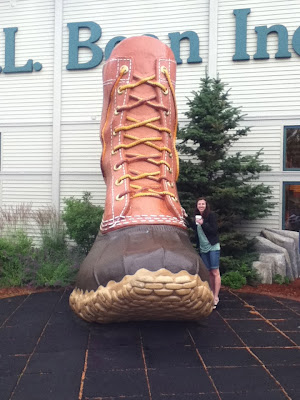 We biked, went to the beach, visited the real L.L. Bean, had lots of ice cream and basically had a great time. For all you road bikers out there (yes, I'm mostly talking to you Steph) you must go to Brunswick. The roads/paths are incredible.  Check out the video below.


I had an incredible time. Then we decided to go kayaking.

The first round of kayaking went relatively smooth. Well, aside from the fact that I was in an ocean kayak and ended up taking an inadvertent swim at one point. The best part of the trip was the five or six seals that were constantly circling our kayaks.  Sarah adamantly disagrees with this. She thought they were going to eat us. I think they were merely curious. Apparently she heard about the seal attack on Buster. 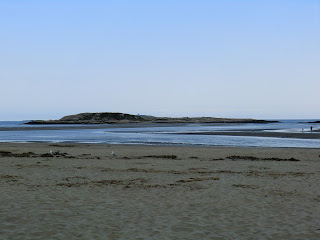 The next day we decided to kayak again. This time Sarah and I threw caution to the wind, ignored all prior advice and forewarning and ventured out in the dual kayak. I must admit, I'm a little bit of a junkie for proving people wrong. The simple fact that people said we would hate each other after riding in a kayak together caused to want to do it even more.

You want to know something? It was awesome.

Sarah and have serious marital flaws (don't worry we are working through them), but one thing we are pretty darn good at is communication. Luckily for us, the single most important thing about two-person kayaking (hereafter referred to as "two-yaking") is communication. It is essentially impossible for someone to act on their own accord in a two-yak. If I thought we were drifting to far starboard (I had to Google search what that meant. I grew up in the Midwest--give me a break), and I decided I would correct our trajectory, if I did not communicate a different stroke pattern to Sarah, I would either 1) whack her in the head, 2) whack her paddle, or 3) essentially lose all of the two-yak's momentum. Basically, I had to communicate everything. I couldn't do something simply because I thought it was the right thing to do. Even if it was in fact, the right thing to do, if Sarah wasn't on the same page, it didn't matter.

I've now been married for roughly 10 months. Although I am still a "young Padawan", as my brother Alan would say, I have to believe that is the most important component to a successful marriage. Sarah will be embarrassed if I tell this story...but..she's out to dinner with some friends so she's not here to stop me. Sarah and I have a very particular "rhythm" to our mornings. Usually I get up first, turn on Bob Oakes (We are both NPR junkies. I like Bob Oakes almost as much as Brian Williams) and make our coffee and breakfast. Well, on this particularly morning I did something incredibly stupid. I'm not sure what happened (maybe I was lost in Bob's majestic voice) but I didn't notice that it was 7:20AM and Sarah was still not awake. Usually Sarah sets her alarm so it's not my responsibility to wake her up. I thought it was odd that she was still in bed, but for all I knew maybe on Thursdays she liked rolling out of bed and going straight to work (we had been married less than a month remember).

Around 7:30AM (she has to be at work at 8AM) Sarah stumbled out of bed and into the kitchen. To be honest, I'm not totally sure what happened next (all I know there was much gnashing of teeth). Sarah kind of looked like this... She wasn't pleased with me.

Later that day we were able to laugh about it, but it did get us thinking. 1) I should have been intelligent enough to at least check in on her around 7AM (she usually gets up at 6:30AM), but perhaps more importantly, 2) Sarah had an expectation of me that was never actually discussed. Granted this is a little bit of a silly example (I admit, I dropped the ball), but I don't think it makes it any less true. I think appropriately communicating expectations and frustrations (as well as more positives aspects of a relationship like trust, gratitude, etc.) could save boodles of marriages.

After taming the two-yak I'm convinced that Sarah and I can endure any difficulty in our marriage (as long as I wake her up before 7AM).

A few more pics from the Fulton Family vacation.